According to the article in the Wall Street Journal, Random House is more interested in getting a piece of the video game market than in worrying about ‘those pesky “book-​​things”…’ [which is not a quote in any definition of the word]. You, like I, are probably a trifle stunned to hear that, what with them making their name as a book publisher by publishing books. In fact, the name of the company is said to have been chosen in 1927 after Bennett Cerf, Christopher Coombes and Donald Klopfer had bought the “Modern Library” imprint. Mr. Cerf is quoted as saying, “We just said we were going to publish a few books on the side at random,” ergo: Random House. 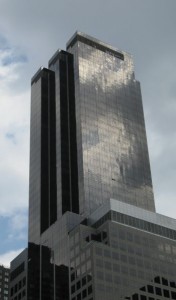 Today’s announcement flies in the face of that tradition, a tradition which is exhibited in floor-​​to-​​ceiling glassed-​​in bookcases filled with volumes published by the many different arms of the company, located in the lobby of its impressive 684-​​foot “Random House Tower” spanning an entire side of a block between West 55th Street and West 56th in New York City.

What is Random House going to do? Video Games.

Granted, they’re going to get involved with the stories in video game entertainment; both during the game development of some games, and after the release of others via tie-​​in books, the latter being something they’ve already been involved with such as the Elder Scrolls–based tie-​​novel The Infernal City.

The idea is that authors and other “story-​​telling experts” will hold the hands of computer-​​programmers who have whiz-​​bang abilities with making computer graphics go “boom” but have a tendency to put together stories with a preponderance of the word “boobies” in the dialogue, or over-​​state the obvious about incoming threats to the player’s character such as “hey, look out for that massive rock bounding down that cliff in your direction! You better move!”

I’ve played more than my fair share of video games in my time (please do not listen to my wife’s exaggerated claims of me playing them for more hours than there are in the day), and there’s some really awful writing in some of them. I’ve not a problem with that writing being improved; some of it needed to be thrown away before it was released [I’m looking at you Keepsake]! Please – dear God, yes! – involve people who understand how to string together a plot! My main concern about this is that the world’s largest English-​​language general trade book publisher is doing it!

Random House will undoubtedly make some serious cash doing this, so they’re probably being smart with this move. That said, I could literally throw a dart at any bookcase in our home and have a tough time not hitting a book that was released either by RH themselves, or one of their seemingly limitless supply of subsidiaries, only some of which include the following (and remember this is not a complete list):

When reached for comment about this development in the industry, a professional author of long-​​standing experience said the following:

They seem to want to do anything except publish books. They probably joined the wrong career assignment group at school. 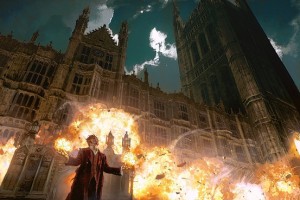 Just yesterday I was looking at the listing for the tie-​​in book for the series Stephen Fry in America (we’re going to watch the series shortly and I was confirming this was what was expected). The hardcover was $28.95; the electronic-​​book was $26.95, which seems an insane charge for any e-​​book, but as this book must have a plethora of pictures, it makes it even more galling. The publisher – who sets the RRP for any edition of any book – was [ahem]: Harper Collins.

Maybe it’s time for a book of murder and horror set in the publishing trade with thinly veiled references to real people and frustrating situations where no one is actually interested in getting good books to people who are interested in something different for a change? Is there enough sex and drugs in the industry to be mined, though? The author replied “Let’s not go there!” continuing:

I may have to up my game and write something with huge amounts of filthy sex and drugs. [HE SIGHED] …instead of the ‘Sherlock Holmes’ story I’m writing today [as a] commission.

It’s unlikely that Harper Collins is intending to actually stop publishing books any time soon, but this is another sign that the occupants of the Mighty Towers of Publishing Power are scrambling to find a foot-​​hold in the New Economy without having to resort to Room 101 or Ludovico Technique tactics. I wish them luck with that, but be prepared for someone to burst into your home and order you at gun-​​point to ‘READ! READ THAT BOOK NOW, OR I’LL BLOW YOUR HEAD OFF!’

So… what does Atomic Fez have as an official reaction?

Let them do what they are doing: diverting effort from the intelligent planning and preparation of books toward video games instead. It certainly lays a path all the clearer to the readers of the world to seek out books from independent, free-​​thinking publishers and authors’ collectives throughout the marketplace who still remember what the key to all of this is: provision of good stories in whatever literary form people want; just without a ridiculously muscled character saving another one which possesses impressive cleavage and little else.