Now then, what’s all this fuss and bother about, eh? People seem to be showing their love for all sorts of books put out by Atomic Fez, and it’s getting a mite embarrassing, wot?

Here’s two about John Travis’s novel, The Terror and the Tortoiseshell.

[John] Travis is an accomplished writer and… The Terror and the Tortoiseshell is an effective opening to a promising new series.

John Travis has penned a novel that’s sort of “Animal Farm”, partly classic noir, and definitely acid trippy weird – but all in a good, fun, highly readable and entertaining way…

Very dark, but also funny in the sickest of ways. Here’s to hoping the world gets to enjoy much more of Benji – maybe if Atomic Fez offers a dimebag of catnip?

We’d just like to mention that the term “dime bag” is one which leaves a feeling of naïve confusion here at Atomic Fez. No, really, we haven’t a clue what Mr. Simms is talking about. The guffaw which was uttered when we read that line was someone else. They’re not here now because… they ran away before they could be caught. Yes.

To read the entire text of each of the reviews above, click the date at the end of the credit. In the case of the 2nd one, click and then scroll about half-​​way down on that link. Once you’ve read the reviews, pop back here and click the cover image to go to the book’s page here on the Atomic Fez web-​​site and order a copy. Remember that they’re mailed domestically from both within North America AND within the UK!

Shifting to the ‘paperback’ titles, let’s hear what the American Library Association’s Booklist had to say about James Cooper’s collection The Beautiful Red.

At the heart of every tale in Cooper’s latest collection of meticulously crafted horror is a disquieting, iconic figure or image. …

While independent publisher Atomic Fez may not yet be positioned to introduce Cooper to a wider audience, the quality of his output so far easily matches that of the best-​​known talents in contemporary horror.

And now… here’s one from Colin Harvey on the Suite 101 site: you can easily read the full text after you select here, as it’s quite a long link, actually.

Through all the stories run images of impending death, damaged children, broken families and corruption, forming the thematic threads articulating the book’s skeleton…

These stories as a whole form a gestalt of a book…

Certainly, while it is less than a novel, “The Beautiful Red” is more than the sum of its individual stories, and forms an impressive collection which will only add to a reputation that continues to grow.

Continuing on with Mr. Harvey, here’s his review about Rhys Hughes’s book Twisthorn Bellow which we’ve not got around to shouting at you about until now.

…Rhys Hughes is a hard act to match; “Twisthorn Bellow” is Hughes at his most madly inventive.

And now here’s a review about this very same novel by Mr. Hughes, this time by the incredible Peter Tennant:

Hughes has claimed the book is his tribute to Philip José Farmer… but he is a writer who wears his influences lightly and the spirits of other literary worthies gleefully flit in and out of the text… each contributing something to the tasty brew that ultimately is all Hughes’ own.

… Rhys Hughes is more fun than one of those barrels of monkeys people talk about, and you’re probably going to have a good time with his book.

We had honestly thought that we already had the reviews for John Llewellyn Probert’s filth fifth collection in hand, but here’s one that was stumbled across nearly by accident, again by the highly experienced Carl Hays in the pages of the ALA’s Booklist:

When he’s not penning gruesomely amusing horror tales, Probert writes essays online reviewing some of his favorite slasher flicks, both obscure and famous. In his fifth story collection, his cinematic appetite often manifests in stray movie references and crisp, screenplay-​​ready narration laced with vivid imagery. The opening story, “At Midnight I Will Steal Your Soul,” for instance, shares its title with a little-​​known 1964 Brazilian movie and follows a fearful woman’s visit to a psychiatric hospital, where an evil presence waits to claim her soul and body. “Ophelia” recounts the fate of a young woman kidnapped expressly to become a model corpse for a group of unprincipled artists bent on reproducing great paintings. In “Your Help Needed Urgently!,” a deceitful businessman is forced to watch video clips of torture scenes to avoid being exposed. More than once Probert goes absurdly over the top with his story arcs, but his penchant for wily humor and odd narrative twists just as often yields a genre gem.

Sadly, the exact issue this appeared in has not yet been located. Anyone with some further information about that should contact Atomic Fez by leaning out the window & shouting really loudly.

Just when you thought we were done with that book (and because earlier we didn’t talk enough about how incredible Black Static is), here’s another review of Wicked Delights: this one from the periodical continually enjoyed in Atomic Fez’s laboratories: Black Static!

[“Two for Dinner”] is so deliriously tongue in cheek and full of witty invention, written with such panache and obvious delight that I found it impossible to read without a smirk of satisfaction taking up residence on my chops. This is the story that best represents the promised Wicked Delights.

A fine collection from a writer who… is a skilled storyteller, one who works at his craft, and is always going to provide fair measure of thrills and chills in a horror mode for the discerning reader.

If you’d like the full text of the Wicked Delights review – plus a bit of an intelligence leak about a new Atomic Fez title from the talented JLP, plus this is the first issue of two with the winners of the recent “Campaign for Real Fear” competition, so you probably want a copy for that reason alone – then here’s what they suggest you do: 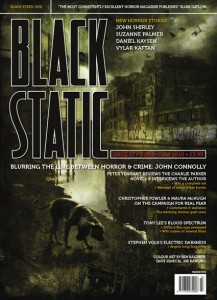 You can buy Black Static in good bookshops, newsagents and specialist stores, both here in the UK and several other countries including the USA. If your local shop doesn’t stock the magazine please ask them to order it in for you. You can also order Black Static via mail order distributors such as Fantastic Literature and BBR, or download an e-​​version from Fictionwise (head here). By far the best option though, for you and for us, is to take out a subscription to the magazine direct: please just click on this link where you can buy our stuff with a credit/​debit card or PayPal. Thanks!

Take it from this year-​​long subscriber, this is well worth the cost. Interzone is also perfect for those who enjoy Science Fiction or ‘Alternative Reality’.

And there you are. Go and have a lie-​​down now, you probably need it after all that excitement.

…right after you buy all these books, though. Priorities, eh?