The following notes were sent by myself to a book retailer who questioned the charging of a price on this site which is somewhat less than the “cover price” or “Recommended Retail Price” as stated on the back of the books and in all official listings of the books’ details.

They are reproduced here in the interests of “transparency” for the benefit of both retailers and readers alike. It is hoped that this clarifies the matter, and that further understanding might be gained by it. The more all of us knows about how the world’s economy works, the better we can work within it for the benefit of us all.

My first reply was as follows, replying to the suggestion that I was charging the retailer the full RRP whilst selling here for less than RRP.

Actually, you’re being charged 40% less than the RRP (or 30% for Limited Editions), so you’re still making money. You’re entirely free to choose whatever price you wish; as is anyone, for that matter. It’s hoped that I’m not right when suggesting the above has a certain whiff of  “collusion” to it. Publishing is already altogether too rife with that just now, and the public deserves far better from everyone in the industry at the best of times, never mind these trying economic times of ours.

Be assured that your order is, in fact, far larger than the number of copies I’ve sold at this slightly discounted price, so it’s unlikely that you will feel a reduction of any sales figure due to my efforts. It’s probable that none of the people who purchase from you are even aware that Atomic Fez has a web site, never mind is offering prices lower than the RRP, and any print or internet advertisement I run does not include the fact, leaving it to the visitor to discover as “an added bonus” and thus not directly competing with your offering in any way more than someone comparing prices might do with Amazon and Waterstone’s .

I am aware of the difficulty of an independent book shop competing with others’ deep discounts, having worked quite some number of years in retail, including about five in a single-​​location book shop.

If the Internet is a shopping mall, yours is a full retail bookstore with the positive aspect of a massive selection as its approach. Atomic Fez’s selection has the vastly limited “only a few titles” approach of a wholesaler, thus making selection only a few things, thus the only advantage is one of a slight discount, presuming someone wants a copy of one of the handful of titles in the first place. Your customer base is vast and eclectic, mine is “folks what know me”. So, you see, I’m still in a position of struggling and limited appeal.

But, speaking of presumption, this publishing nonsense is in fact my only income, so the “other reasons” you allude to are of little relevance to me, yet aren’t entirely clear to me either. This is a business I’m running here (although my bank management might disagree).

Your order and continued customs is valued, as is your position. Please let me know if you have any concerns.

That then got me wondering about things, and thus I tweeted as follows:

Let’s say, for the sake of argument, a retailer wanted me to stop charging less than RRP on my site. That would be “collusion”, wouldn’t it?

Which didn’t elicit any response, but I did a bit of research in order to know that I was actually headed in the right direction and found both the one in the Oxford English Dictionary (Concise) and THIS DEFINITION of “collusion” to be applicable, both with the “overt” and “tacit collusion” uses of the word. 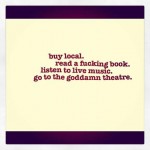 This notion of collusion – coupled with the widely distributed (widely on Facebook, anyway) image to the left encouraging people to buy local, support the arts, and coming at the same time as people are wanting to not support the National Hockey League’s Board of Directors after screwing the fans through the Players’ Association – got me tweeting this:

So… there’s this meme about “buy local…” and we all agree, but what have you *done* about it? facebook.com/AtomicFezPubli…

The retailer then got back to me in response to my original note, asking the following:

I am sorry but collusion between who and who?  I have spoken to no-​​one about this.  I have no idea if anything else is stocking it.  Or (again) am I missing something?

One might suggest that he’s missing the fact that he spoke to me about the price being charged here on Atomic Fez site, which is precisely the point which had attempted to be made.

So, after saying the news that further orders weren’t going to be placed by them was surprising and disappointing  I took another run at explaining the position which they were placing me in.

The suggestion of “collusion” is a considered one, in that you seemed (and that word is also carefully considered) to be suggesting we both need to charge the same rates, even though we serve entirely differing markets. Additionally, whenever any product is offered for sale in the marketplace for an identical price no matter who the offering business is, then the consumer is ill-​​served as competition is not engaged in. Your tacit suggestion that my rate should be identical to yours, thus equal to the RRP, despite the differing markets and situations, amounts arguably to a mild form of collusion. I cannot tell you what price to charge, nor would I expect to do so; the closest being the recommended retail price. This principle is why the old Penguins and Corgis have the statement about how the RRP isn’t valid in Australia because even suggesting a price to a retailer was frowned on there.I’ve no idea what the feeling in [your area] is about it, nor the local regulations, but in the USA there’s a massive broo-​​ha-​​ha about “price fixing” using the “agency model” in an alleged arrangement between Apple’s iBooks Store and the major publishers. Their purported discussions and operating principles behind that situation sounded to me like just about every single principle which has driven the publishing industry since day one. The one thing which did stick out was the aspect that the publishers and the retail outlet of the iBooks Store were coming to terms regarding the final selling price to the customer, and that’s not on. The retailer sets a price at which the product is offered for sale to the customer, who then has the right to either accept it or offer a new one for the retailer to accept. No one is going to walk into a drug store and start haggling over shampoo, but that’s the theory.

What it comes down to is this: I sell to you at the RRP, which is there for anyone to sell at: Amazon, Chapters, WH Smiths, yourself, or whoever. You are charged 40% (or 30% for Limited Editions) less than that RRP for your wholesale chargeable cost. What you actually charge your customers is entirely up to you, and I’ve no part in that beyond the original RRP. If Amazon or Chapters or [another independent book dealer] decides to deep-​​discount my titles, I can’t stop them, just as when the Amazon retail partners “thebookcommunity_​ca” or “Vanderbilt CA” decide to charge several times the RRP (it’s happened several times, and is likely a money laundering scheme which doesn’t involve a single copy of the book).

My slight discount at the “manufacturing source” is not meant to approach the added value that your carrying of a broad selection of titles and authors which rightly justifies whatsoever price you seem appropriate independent of any wishes I may have.

It’s entirely probable that the individual hasn’t read anything of my notes beyond the first paragraphs of each of them (which is suspected owing to none of the later points made are even mentioned in passing). This is not something I have any influence over.

Honestly; I don’t expect to become Midas doing this. I don’t even expect to become able to buy a new car each year after throwing away the one from the previous year. I’m simply trying to find ever possible way I can find an advantage both ethically and economically, in order to pay authors a decent royalty and cover the simple cost of production of the books. I also have a need to pay my own bills (heat, light, food) which aren’t a part of the actual price of publishing eclectic, genre-​​busting fiction. So far, the bills for printers and author’s royalties have been always paid, and most of those and further costs have been borne by means other than revenue.

When someone suggests that someone’s slight advantage is something that they themselves cannot condone, then one should be a bit concerned about what sort of influence they feel is right. As it’s certainly not helping me anyway, then it seems even the potential of competition isn’t welcomed, and one wonders if this is the sort of world one wishes to be a part of in the first place.

Atomic Fez continues to support the selling of its books by anyone and at any price they see fit. If books are sold, then they are read; or what’s a Heaven for?