Both When Words Collide in Calgary, Alberta and Mythcon 45 in Norton, Massachusetts will have Atomic Fez’s Authors in attendance!

The author of Sleepless Knights, Mark H. Williams, [photo, left; so as to aid the spotting of same in the wild], will be attending Mythcon 45. Part of the proceedings of the event is the announcement of the winners of the Mythopoeic Awards, Mr. Williams being a nominee for the “Mythopoeic Fantasy Award for Adult Literature,” alongside Yangsze Choo (The Ghost Bride, William Morrow), Neil Gaiman (The Ocean at the End of the Lane, William Morrow), Max Gladstone (Three Parts Dead, Tor), and Helene Wecker (The Golem and the Jinni, Harper). Should the winner be Sleepless Knights, it’s best to seek the location of Mr. Williams by looking directly at the ceiling to locate him.

Other events and panels Mr. Williams may be involved with /​ attending at Mythcon 45 are readings and the following panel:

Attendees of the 4th Annual When Words Collide can rub elbows with such luminaries as the author of I, Death, Mark Leslie (Lefebvre) [image, left], who is also a Guest of Honour; Chris Rothe, the author of Dirk Danger Loves Life. While Mr. Leslie’s schedule is easily followed on the event’s site – for the panels and presentations he is participating in are numerous – Mr. Rothe’s are equally easy: look for the young man wearing flippers and other snorkelling equipment, or possibly making dinosaur noises.

Atomic Fez’s Publisher /​ Proprietor, Ian Alexander Martin is also attending, and during the event will be participating in the following panel discussions (subject to change) explaining how Everyone Else is Very Very Wrong (this, sadly, is subject to inevitability): 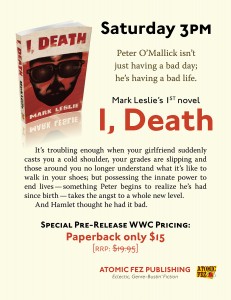 Between those points in the schedule, have a look in the Merchants’ Room near the table with EDGE Science Fiction and Fantasy Publishing books on it, because that’s where you’ll also find copies of Atomic Fez’s books; including copies of I, Death: freshly created for WWC, and only available there! Attend the launch at 3pm on Saturday and witness the author read words aloud!

You can probably also find Atomic Fez’s Publisher /​ Proprietor in the pub with a pint of beer in his hand. Failing that, have a look under one of the tables; you might be rewarded for helping him to his room.

Thankfully the Atomic Fez Flying Wing [artist’s impression, left] is going through final air-​​worthiness checks so as to be ready to whisk those involved thither and yon in the pursuit of spreading the good news of books!! The Publisher /​ Proprietor is looking forward to spending much of his time in #15 and #16, so as to properly receive other passengers as some are picked-​​up here, others are dropped off there, and so on.